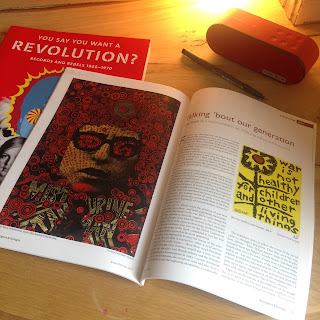 In celebration of our 300th issue of Resurgence and the culmination of its 50th anniversary year – we have been looking back to the explosive era of the magazine’s emergence, ’66 - ’70, and have selected the defining revolutionary songs of the times.

Our 300th issue, just published, aptly coincides with the current You Say You Want a Revolution?  Records and Rebels 1966-1970 exhibition at London’s Victoria & Albert Museum. To commemorate this, the staff at Resurgence & Ecologist have compiled our ‘Top 20 Songs that Changed the World’ from the turbulent late Sixties era which is available on the magazine’s website.

Here is our Top 10 Songs of Revolution:

The V&A’s flagship exhibition, You Say You Want a Revolution? Records and Rebels 1966-1970, focuses on late Sixties’ pop culture and the wider perspectives which, like Resurgence, it gave voice to - such as the struggles for human and civil rights, a burgeoning interest in Eastern and other forms of spirituality, the development of environmentalism and feminism, and concerns about the impact of consumerism, to name a few.

Greg Neale, Editor-in-Chief of Resurgence & Ecologist, whose article about the flagship V&A exhibition for the 300th issue of the magazine, considers the influence of Sixties’ counter-culture as a stimulus for lasting change, says: “The You Say You Want a Revolution? exhibition provokes the question, ‘did the Sixties really change the world?’ While much of the work considered in the exhibition proved to be ephemeral, the explosion of creativity from the era is undeniable, as is the rising influence of the Green Movement which Resurgence pioneered. The emergent back-to-the-land ideas of self-sufficiency, return to Nature, and new technologies that focused on the Earth’s fragility were to become the most far-reaching of the era.”

Greg Neale continues: “To celebrate our 300th issue of Resurgence, we’ve compiled our ‘top songs from the era which changed the world’. Many of today’s prevailing ideas about the environment, social justice, wellbeing and peace, as continuously featured in Resurgence, were fuelled by the legendary songs of this period – from The Beatles’ Revolution and Lennon and Yoko’s Give Peace a Chance to Joni Mitchell’s Big Yellow Taxi and James Brown’s I’m Black and I’m Proud. Our list includes protest, civil rights and anti-war songs, as well as tracks that powerfully evoke the emotional and revolutionary spirit of the times. We invite you to share your feedback on our song choices on the Resurgence Trust Facebook page, and we’d love to hear which songs you think most changed the world.”

The milestone 300th issue of Resurgence comes in a year of milestones for the magazine, including the ‘One Earth, One Humanity,One Future’ festival in Oxford in late September, which united the world’s Green and Social Justice Movements to celebrate Resurgence’s 50 years at the forefront of environmental change, and to share ideas for building a more sustainable, healthy and harmonious future.

Paul McCartney says: “Happy 50th anniversary Resurgence!  My family and I have been involved in animal welfare and vegetarianism for many years and would like to congratulate you for the good work you do for the planet and the creatures who live in it. Best wishes for the future.”

The pinnacle of Resurgence’s 50th anniversary year, the 300th issue now flies the flag for many of the enduring ideas the magazine has pioneered since 1966, which remain relevant and critical, today. Highlights include Christine Toomey’s profile on global mindfulness pioneer, Thich Nhat Hanh; Roman Krznaric’s elucidation on how cultivating empathy can transform societies; articles by Meg Beresford (former General Secretary of CND) and Ione Bingley highlighting the plight of bees, butterflies and nature at risk; and an article by Fritjof Capra sharing new scientific evidence for the long held supposition of Buddhists and others that humans are interconnected and part of nature.  The issue also infuses the magazine’s usual rich mix of news, arts and book reviews, and includes pieces about the growing resistance to fracking worldwide; approaches to ending poverty; green business; natural foods; and the importance of scientific and religious groups cooperating on environmental issues.

Resurgence invites you to share your thoughts on their song choices on the Resurgence Trust Facebook page. They’d also love to hear which songs you think most changed the world!

To order the 300th issue of Resurgence & Ecologist (Jan/Feb 2016) in print or PDF format, visit the Resurgence online shop. For details of The Resurgence Trust’s special Gift Membership offer, visit our gift membership page.
at 09:19 No comments: