The Minute and Miraculous 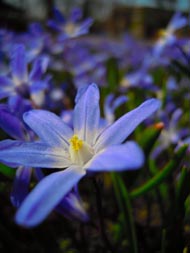 After the long, lagging winter, the season of singing is at last upon us. Fuzzy buds and blossoms burst from the trees and shoots come burning up from the ground in a colorful profusion.  Minute wonders surround us, yet they are so easily overlooked. The petals of magnolia or bluebells when examined closely reveal how they draw and translate their beauty from water and light – into prismatic glory.

In these signs of vernal renewal I find a kind of counter balance issuing from Nature; an answer to the human-created chaos unfolding around the globe. We wage war, poison Earth and sea – yet still, she sings. The exquisite trills of robins, spinning out like dewdrops along a spider’s silken line are, just like the flowers, awash in light.

In spring perhaps more than any other season, we sense reminders of the divine all around us.  This ancient, eternal dance of renewal brings into perspective this current blink of history, overshadowed by the rage of homo sapiens. Flowers and birds were here first and in one form or another, they shall endure and in this, there is a certain solace. And for those so inclined, invitation stands, that if even for a few moments, we may set down the human drama and “be as the lilies” – discover to our delight, that there exists a place for us within the symphony.
Leah Lemieux is an author and lecturer who works on dolphin protection, education and conservation initiatives. www.RekindlingTheWaters.com
at 02:39 No comments:

Email ThisBlogThis!Share to TwitterShare to FacebookShare to Pinterest
Labels: Environment, Nature and Nurture

The tree that the Celts traditionally associated with April was the hawthorn, a tree of love and fertility. But the hawthorn does not usually flower until May which is why it is also called the May tree. The blackthorn flowers now, around Easter. Its soft white blossom is in stark contrast to its harsh black thorns. Known as the crown of thorns, the blackthorn tells us of the difficult tasks that must be faced, indeed, that cannot be avoided. This is the place of shadow that must be honoured before the fullness of spring can be enjoyed.
In the mythology of hawthorn, we hear more of these difficult tasks. The hawthorn goddess Olwen was the daughter of Yspaddaden Pencawr or Giant Hawthorn.  She was known as ‘She of the white track’, for white blossom sprang up wherever she walked, leaving white tracks across the land, just as the flowering of hawthorn in the hedgerows does now. The nephew of King Arthur, Culhwych, fell in love with her and was set by her father countless impossible tasks before he could claim her hand. He was helped by the Knights of the Round Table and won his bride.
So Olwen’s white track becomes the bridal train leading us across the land to the place of union. Here where the sun and earth are joined in the marriage that is spring, where the masculine and feminine within us become one, this is our inner alchemical wedding. April is the time of preparation for this, where the sacred tasks are set.
But just as the hawthorn does not blossom until the end of April, it can be hard in the early part of the month to discern our white track from all the others available to us. Its whiteness, as it were, is not apparent yet. The white track is not a road of oughts and shoulds, it is a path of heart. We may not recognise it until we feel it. Stepping onto it thrills us to the core.

Ian Siddons Heginworth is an environmental arts therapist, founder of the Devon-based Wild Things community programme and author of Environmental Arts Therapy and the Tree of Life, Spirit’s Rest Books. www.environmentalartstherapy.co.uk
at 06:08 No comments: