Green House Think Tank is an exciting new environmental organisation which was created last year with the remit of “challenging the ideas that have created the world we live in now, and offering positive alternatives”.
I attended its recent event at The Guardian’s headquarters in London where Green House think tank chair Dr Rupert Read and Polly Higgins, environmental barrister and Damian Carrington, head of environment at The Guardian, explored the idea of the ‘Guardians for future generations’ idea which Rupert had developed in discussion and collaboration with the membership of the Alliance for Future Generations.
Over 40 people attended this event which included a mini-try-out of Rupert’s idea. Twelve of those attended the meeting – including me – were picked at random to form a mock-jury to decide an issue of vital importance to future people. Our topic was fracking and as a ‘super-jury’ we agreed, on balance, that it would be against the basic interests/needs of future people. 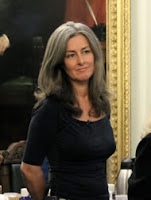 This mock-super jury session was modelled on Polly Higgins’s ‘mock ecocide trial’ of last year, which has been featured in Resurgence.
This event represented a new idea to charge a ‘super jury’ of ordinary people with more extensive powers than the House of Lords. It followed Rupert’s launch of the ‘Guardians for Future Generations’ report at the House of Commons in January. The report proposes that a council of randomly picked members of the public should be placed above the House of Lords to oversee all government decisions. The Guardians’ central powers would be a veto over new legislation that threatens the interests of future generations and a right to force a review of existing legislation that is already damaging their basic needs.
For more information on Green House Think Tank, please visit: http://www.greenhousethinktank.org/page.php?pageid=home
Sharon Garfinkel is PR and Marketing Manager at Resurgence.
at 06:13