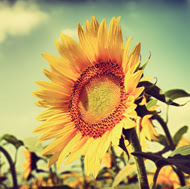 Living in a Buddhist Centre – Life Happens II
I finally summoned up my courage (after weeks of procrastination) and uprooted a mystery plant, that had self-seeded and grown, to Triffid-like proportions, in the corner of my basement garden.  For most of its life, I had assumed that it was a sunflower – the leaves were big and pear-shaped, mid-green, with lighter veins, slightly furry and gently serrated at the edges, the stem was thick, woody and hairy...But then it had developed side shoots (like small branches) and grown really bushy...
Odd, I thought, this plant has ambitions to become a small tropical forest all by itself, whereas sunflowers are usually single stemmed, tall and leggy... Then it grew more side stems, and strong sturdy suckers...I thought it may be protesting about the lack of light by growing more and more sideways, upwards, outwards, across...  It grew to about four metres (16 feet), high: tall enough to reach the sunlight over the top of the basement.  I tied the now leaning, top heavy, stems up to the inside of our cast iron railings.  But what was it?  But then I thought – relax – let it flower.  Let it have its moment of glory as any self-respecting sunflower should!
The flowers came and were anti-climatical.  Tiny.  It was so disappointing. The flower heads were just bigger than the bottom of teacups, there were seven of them.  And, whilst the petals were yellow, so were the centres, with small stigma and tiny, undeveloped, seeds.  Sunflowers usually have those lovely dark, often chocolate brown, stigma and anthers at first, followed by the beautifully geometric Fibonacci spirals of plump seed cases, so this was a disappointment.
This giant plant came out surprisingly easily when I pulled, only to reveal dozens of white, muddy tubers attached to the roots.  It was almost surreal.  I was working in twilight, so at first I couldn’t see properly what these bumpy protuberances were, or where they were coming from.  I hadn’t expected such an abundance of what almost looked like button mushrooms: spherical, bulbous, asymmetrical and round, earth-covered, glowing, phosphorescent fruit.  I gathered a carrier bag full, of these surprising creamy, muddy, fungus-like Jerusalem artichokes, underground critters that had grown all by themselves, beneath the concrete pavements of Bermondsey, without anyone knowing or caring that they were there.  And how good they were, boiled, with butter and garlic for my supper! 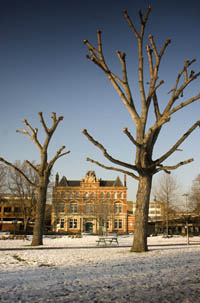 Later that evening, my own seemingly stubborn and untamed mind did just the same as the plant.  I was sitting in my room, letting my mind go and just watching my thoughts.  I hadn’t got the energy to go and sit on my meditation mat, but I believe it’s OK to not force yourself to formally meditate if you don’t want to.  A friend of mine at our parent monastery, Samye Ling, recommends:  ‘Just sit, and relax and watch where your mind goes.  Avoid all that Buddhist flim-flam’.  No pressure.  Nothing fancy, just let yourself be.  No sitting in uncomfortable positions, no special room to be in.  It’s a do-nothing, pro-idleness stance.
So I was sitting, reflecting, in my comfy chair, but actually feeling utterly depressed and miserable and my mind was racing.  I was thinking about how unforgiving and angry I am towards those who I feel have deliberately and unfairly hurt me. (And I was feeling merciless even though, in more tolerant states, I know that those who have been brutal act this way because of the brutalisation that they have suffered).  I was having all sorts of negative hate-filled thoughts.  Then I thought, if I was in the religious tradition I was brought up in, I would be blaming myself for these thoughts.  I would say I was sinning.  But, I thought, I am in the Buddhist tradition now and I can be kind to myself.  I can accept all this negatively in myself.  I don’t have to try to be lofty and repress my misery.  So, for once, I tried to stop trying to not have these thoughts.  Instead, I tried to think what are these feelings of hatred like?  Can I be kind to myself even though I am doing what I am not proud of?  Can I stay with these emotions I despise and feel ashamed of, and not blame myself for having them?
As usual, I didn’t get very far, or stay in that soothing mode for long, because my mind likes to flit. But then I became conscious of just breathing.  I was suddenly aware of sitting and breathing, having let go of identifying with my thinking.  What a release that felt like!  What was different was that I hadn’t consciously willed getting to that place, but maybe because I have practised meditating, where I have trained myself to come back to my breath, again and again, and that moment of release just came.  I would normally have stayed, hooked into negative thoughts.

That return to my breath felt like a blessing, (isn’t it strange how we need to use theological language, even though we don’t necessarily have a theist perspective, to try and explain what these magical moments are like?)  It seemed that all that time I had spent on a mat, trying to meditate, had paid dividends.  I escaped some sort of entrapping cycle of negativity without really trying to.  This was equivalent to the miracle of my unexpected crop of artichokes.  My meditation practice has worked (to some extent)!  My mind was beginning to change!  And even though I don’t meditate in order to achieve any specific benefits, I was glowing.
Amanda Root was an academic at Oxford University and now lives and works at Kagyu Samye Dzong Tibetan Buddhist Centre, Bermondsey, London. Her article Life Happens was published on the Resurgence website.

Email ThisBlogThis!Share to TwitterShare to FacebookShare to Pinterest
Labels: Be The Change, Consciousness