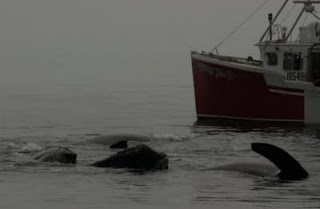 A conversation with researcher and conservationist Laurie Murison

“Most of our knowledge about the North Atlantic right whale has been lost and is only now slowly being re-learned.” This is not surprising considering that this animal is one of the rarest on Earth. Having studied right whales in the Bay of Fundy since 1982, Laurie Murison is certainly qualified to tell the dramatic story of this beautiful and highly endangered animal.
“An amazing property of whale blubber, as far as humans are concerned, is that it becomes oil when cooked and, after cooking, remains an oil rather than reverting back to fat. It also burns extremely well.” These valuable properties may have initially been discovered by accident. Maybe one day a dead whale washed ashore and ‘cooked’ in the sun, turning its blubber into oil, and was later found by a human who had a brilliant idea…
“Commercial whaling began 1,000 years ago in the Bay of Biscay.” The Basque people became efficient hunters. They had stations on shore to spot whales and alert the long boats, the boats men rowed out, killed the whale and towed its body back to shore. Right whales were the ‘right whale to hunt’ (hence their name), for several reasons. They came close to shore, were slow moving, spent time at the surface and, because of the density of their blubber, floated when dead, allowing for easy transportation back to shore. Most importantly, their bodies yielded huge quantities of oil.
In the 1400′s, Europeans began hunting right whales further afield in North American waters. “During the 1500′s and 1600′s, the age of exploration and exploitation of the high seas, oil very quickly became part of European life.” Even by the 1600′s, right whale numbers had plummeted. Whalers began additionally hunting bowheads, humpbacks and sperm whales, but the price for a right whale was exorbitantly high. “One right whale catch could pay for the majority of a whaler’s costs for the entire year, so this incentive only served to accelerate their decline.” Whaling expanded from the North Atlantic into the North Pacific and then the Southern Oceans.
By the 17-1800′s, oil was used in England for lighting and, as the industrial revolution took off, oil was needed to lubricate machine parts and allow longer working days in the darkened winters. “It is an interesting question to ask how differently the industrial revolution would have developed was it not for oil. That explosion of technology got us hooked on the stuff!” 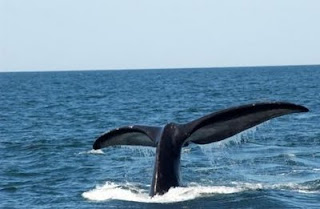 By the late 1800′s, modern whaling was born with the invention of the exploding harpoon head, steamships and new methods for transporting ‘sinking’ whales. This was bad news for many species of whale, but took the pressure off right whales to some degree. In addition, whale oil was by now being replaced by petroleum. “But when the industrial world stopped exploiting whales, the fashion world soon took over. The wonderful, flexible properties of baleen were discovered!” This material was used for such inventions as corsets, hoop skirts, parasols, furniture springs and horse drawn carriages.

In 1935 a decision was made to protect all right whales, no doubt helped by the fact that they were no longer commercially valuable. At this time it was believed the North Atlantic population numbered about 50 individuals, with 400 in the North Pacific and more in the Southern Oceans. In 1937 the protection took effect and this multi-country agreement became a precursor for today’s International Whaling Commission. Illegal whaling still continued unfortunately, for example the North Pacific population fell to about 30 individuals due to illegal whaling by USSR.
It is possible that places such as the Bay of Fundy helped the North Atlantic species survive the whaling years. The bay, with its colossal tides and dense fog, never had a history of whaling and no sightings were made there before research in the 1970′s and 80’s. “It may well be that whales who spent more time in remote areas such as the Bay of Fundy lived long enough to breed, thereby keeping their entire species alive.” 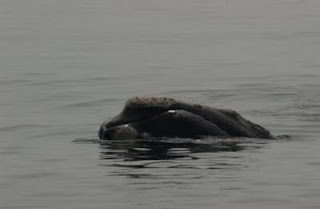 During the 1980′s, North Atlantic right whale numbers increased from approximately 200 to 300. In the 90′s they suffered a decline, probably due to a lack of food and increased accidental mortality. “2001 was a baby boom year with 32 calves being born!” From 2001-2011 an average of 22 calves have been born each year. And that brings their story up to date with an estimated North Atlantic right whale population of 450-500.

But what of the future for right whales, where does their story go from here?
“This is still unknown. We do not know if the North Atlantic right whale has sufficient genetic variation to survive in the long term, let alone the North Pacific species. The Southern right whales have recovered more rapidly. But all right whales face continued threats from other human activities such as ship collisions, entanglement, pollution, climate change and loss of food and habitat. We may be able to control shipping and fishing to some degree, but with the larger and longer term global problems of pollution and climate change, we have no idea what impacts will be felt in the future…”
In another hundred years time, I wonder what the history books and computer applications will have to say about right whales…
Laurie Murison is the executive director of Grand Manan Whale and Seabird Research Station, on Grand Manan Island in the Bay of Fundy, Canada. To find out more about the organisation's work, go to: http://www.gmwsrs.org/main.htm
Amanda Banks is a freelance writer from England, recently engaged in writing about the life and work of cetacean conservationists in North and South America. To read more of her posts about conservationists, go to: http://amandabanks.com/blog/
Copyright in photographs belongs to Grand Manan Whale and Seabird Research Station.
at 11:41