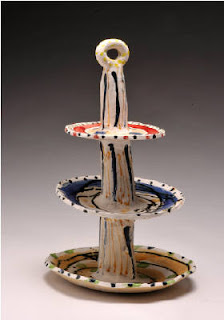 The glitterati of Boston and Massachusetts ceramic and art society were there at the opening. In the speeches you would have thought I was as important as Picasso.
The response is full-on and enthusiastic. One collector told me she had bought a piece of mine from my last show here and then found the colours of her house did not work, so she bought a new beach house for the pot and designed the décor around it.
Another collector spent a very long time communing with the pots.  He gazed deep into the vessels, and was stroking them, feeling with his hands where my hands had been in the clay, noting all the thumbprints and fingermarks, and delighting in his visceral connection.
Some people had been following my work for years, and noticed developments and how it is evolving. Considering this is my first solo show in the USA, I wondered how they knew it so well. They said it has been featured in many books here, and over twenty-five years ago I was in a show of British Ceramics in Dallas which people remember. And some had been at a big arts conference, NCECA, three years ago in which I was the International Guest Presenter.
I was truly surprised to find that so many people here know my work well. I had thought that to most of the people at the opening I would be a new artist, but it was certainly not the case.
Lucy introduced me to all these people who seemed like immediate friends. It is a fairly intimate connection for me when people respond to my work so well. I know I am going to like them because they understand the essence of me. (Which is why I have always had a soft spot for Tony Blair as he is on record in a Sunday newspaper holding a piece of mine saying it is one of his favourite things.)
Red spots were now appearing rapidly.
And then Lucy, myself and some of the guests had dinner in the gallery. It was a lovely gesture and a great way to get to know everyone, to talk, and then in pauses to look up and see the colourful ceramics dancing.
So all of my fears were totally groundless.
Now it is early the next morning and I have been invited to go pilot gig rowing here today with a club in Gloucester, which being America is only ten miles from Manchester and 40 from Weymouth. Bideford is not far either!
It should be a perfect balance to the arty activities in which I am expressing my individuality; in rowing I am in the boat with 6 others and we have to be in perfect harmony otherwise the boat slows. The sun is shining, the weather is warm and lets hope the sea is not too bouncy. I will find out if there are traditional boat builders here too, being kept alive by the resurgence of interest in sea gig rowing as a sport.
Sandy Brown is an internationally renowned ceramicist who lives and works in North Devon. She is the Art Advisor at Resurgence magazine.
Find out more about Sandy Brown http://www.sandybrownarts.com/sandybrownarts.htm
Visual Jazz exhibition takes place at Lacoste Gallery from 16 July to 3 August 2011
http://www.lacostegallery.com/dynamic/artist.asp?artistid=84
at 10:11