A Wild and Untamed Landscape 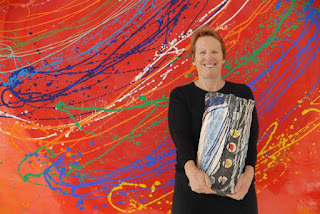 I am now in a very beautiful studio miles out in the mountains, only 1 hour by car from Canberra.  On the hill road this morning driving out to the studio from a small town, called incongruously Bungendore which sounds like something from Harry Potter – in 22 miles we saw only 2 other cars.  Yesterday a car overtook us which was a major event.  The place is empty.  Out in the bush, miles from anywhere, there are only hills and trees and kangaroos for company,  I could just make out a tiny village in the distance.  Yet in the middle of bush and scraggy eucalyptus trees there is a  mainline railway from Sydney to Canberra which stops a mile down the road at Tarago, the village.

Jane Crick, the potter who invited me and who organised my whole tour of Australia, runs a teaching studio out here in the bush, and has 50 acres.  She has a tin shed studio, a tin shed for the kilns, a tin shed gallery, a tin shed toilet and an old yellow railway carriage on a very short track as a sleeping space.  She has solar powered electricity and, and no water except rainwater, which is stored in a huge tank.   Jane lives in Canberra and comes out here to her studio, as do all her adult students – some of whom travel for miles to get here.  They are desperately keen to come as the Adult Education centres where they were going regularly are being closed due to government cutbacks.  It is absurd that the government should close the vocational courses, as the economy here is very strong. Pounds sterling don’t go very far here, certainly not as far as they did last time I was here 24 years ago when everything seemed cheap.   Now Australia has managed to keep hold of some regulation of its banks and so did not get caught up in the crash bang wallop which affected banks in the UK.  Consequently the dollar is strong against the pound.  And China is buying up all their minerals.  There are rare earths here which do not exist anywhere else in the world, tantanum for example, which is used in mobile phones. It does seem bonkers to depend on selling capital materials, like a giant Ponzi scheme.

Out here in the purple hills it is a beautiful location, truly amazing, like being in a national park except it is just wild country.  Often in Australia I get the sense that I could just start walking out the door and go for thousands of miles to the other side of the country before coming to any sort of obstruction.  And that is in spite of white people having been here for over 200 years and in spite of all the damage they have done.  Still the landscape is wild and untamed.  White people could leave tomorrow and I get the impression that in a few years the trees and wild life would overrun their doings. The strength of the landscape is in the psyche of Australians and is reflected in a national longing for art which expresses their relationship with it.

There is a large pond in a dip in the hills below the studio, which is manmade, and is a magnet for birds and frogs.  They sing and croak and gargle and hum all through the night.  We paddled around in the marshy land at the edge of the large pond, which locals call a dam, looking for clay to use as a slip on the pots.  It’s not that easy to find clay here, nor soil either actually, as even though the landscape looks wild and original, the trees are sparse because the land was cleared.  So the soil was blown away.  It never was very deep at all, and that has given me a deeper appreciation of soil as an entity.  We have a huge amount of it in England, it goes down deep in many places and is moist and full of nutrients.  Here in these hills it is only an inch or so deep; and seems like a valuable and rare resource. You can’t just make it overnight.

During tea breaks my students on the course inevitably talk about wildlife:  about wallabies, about goannas, and bandecoots.  Some people have seen pelicans flying around.  Enkidnas, which are prickly creatures that lay eggs and are related to the duckbill platypus, often crop up in conversations too.

I bought a musical instrument called a zyladrum from the only craftsman in the world who makes them.  He lives near here and has developed a method of making a tuned wooden box drum.  It sounds divine, it is impossible to make a bad sound.  I am not particularly musical, have never played anything like this before, and on my first attempt made sounds which were meditative, hypnotic and tuneful.  People told me I should make a recording!   I am completely hooked on it.


Sandy Brown is an internationally renowned ceramicist who lives and works in North Devon. She is the Art Advisor at Resurgence magazine.
Find out more about Sandy Brown
at 04:58

Email ThisBlogThis!Share to TwitterShare to FacebookShare to Pinterest
Labels: Crafts