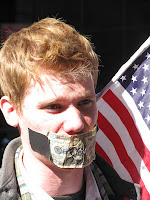 Stefan Simanowitz spends a week with the protesters in New York

“You know, deep down I never believed that this movement could change anything” Shaun Bickard admits as we march along Broadway last week with 15,000 noisy demonstrators. “But after today I’m beginning to think it can.” Bickard, a 41 year-old electrician from the Bronx has never regarded himself as an activist. He visited Zuccotti Park, the heart of the Occupy Wall Street protest, after seeing footage online of four women pepper sprayed by a policeman. “At first I just came to check it out. Then I came back and I joined the march on Brooklyn Bridge where I ended up getting up being one of the 700 arrested,” he explains. “When I stepped out of jail I found that my support for the movement had turned into full-on commitment.” And it is stories like this that have transformed Occupy Wall Street from a small protest of into a significant nationwide movement in the space of four short weeks. 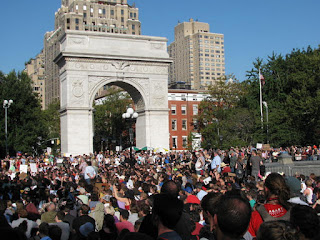 Last Wednesday’s march from Zuccotti Park to Foley Square was a high-water mark in terms of mobilization for the movement as workers from fifteen of New York's biggest unions came out in solidarity. Up until then, the protestors had confined themselves to Zuccotti Park, the concrete plaza in the centre of New York’s financial district that has provided a permanent base for the protest since 17th September. Whilst the park provides a crucial practical and symbolic focal point for the movement it cannot accommodate the numbers that turned out for the march. Indeed on Saturday afternoon, expecting a large turnout, Occupy Wall Street held its 3 o’clock general assembly in the larger Washington Park. But these are the type of logistical difficulties the movement relishes. 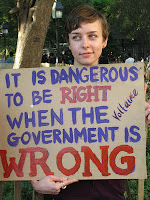 Occupy Wall Street is attracting increasingly large numbers of people of all ages and from all backgrounds. The mood is upbeat and the festive atmosphere has been aided by a spell of the unseasonably warm weather which topped 80 degrees last weekend. But despite the positivity there is also a strong undercurrent of anger. “Damn right I’m angry” says 48-year old Lawrence English. “I’ve got three kids and haven’t worked for over two years. Our government cares more about corporations than it does about people. This ain’t just an occupation, it’s a hostile takeover.”

Despite their anger the protesters are committed to non-violence and determined not to allow themselves to be portrayed in the media as an unruly, destructive mob. Even in the face of well-documented incidents of police brutality the protesters have remained peaceful. Following widespread criticism of the police’s strong-arm tactics – particularly the mass arrests on Brooklyn Bridge - it seems that the NYPD have been ordered to take a more restrained approach. 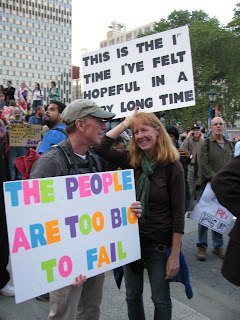 In Zuccotti Park – nicknamed Liberty Plaza – several hundred protesters congregate day and night, their numbers swelling in the afternoons and early evenings as people gather for the two daily General Assemblies. Described as “a horizontal, autonomous, leaderless, consensus-based system” the General Assembly is modelled on the assemblies that have driven recent social movements in Tahrir Square and Madrid’s Puerta del Sol. Anyone present at the assembly can propose an idea or express an opinion and decisions are reached by a show of hands. The method does not make for quick decision-making and is slowed down considerably by the fact that New York City has not granted the protesters a permit to use “amplified sound”. This means microphones, speakers and even hand-held megaphones are banned and the General Assembly has had to adopt an innovative system dubbed the “human mic” whereby each sentence is repeated by those around the speaker and then repeated again by the next ring of people until the sentence ripples across the park. 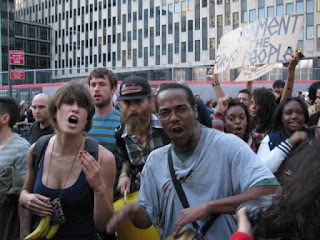 The organisation in Zuccotti Park is impressive. There are no leaders or governing body but smaller working groups have been set up to support specific initiatives ranging from food, medical, and legal committees to arts and culture and direct action. ‘Stations’ around the park provide information and services including sleeping bags, clothing and toothpaste. A generator provides power to ensure all events in the Park are filmed and ‘livestreamed’ and a charging station enables protestors to recharge their i-phones, cameras and computers.
Volunteers circulate picking up rubbish and there is even a library and a broadsheet newspaper – the Occupied Wall Street Journal. An open-air canteen serves up free food, its menu constantly replenished with donations from local shops or well-wisher or bought with donations. As well as a variety of staples such as peanut butter-jelly sandwiches and rice and beans it can offer surprises such as sushi and ice-cream. 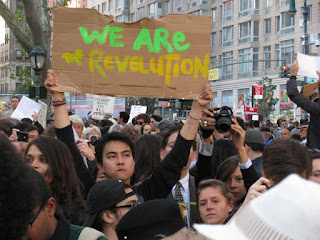 One of the main criticisms levelled at the movement is that it lacks focus and concrete goals. Indeed ask each person in Zuccotti Park why they are there and you will get a different answer. You will hear talk about unemployment and welfare cuts, healthcare costs and environmental destruction, cuts to public education and unfair taxation. But despite the multiplicity of issues raised there is an underlying cohesive sense of anger at corporate greed, government mismanagement and inequality.

So far the movement has not attempted to offer a clear set solutions or concrete list of demands. Whilst these may emerge there is no sense of urgency to focus on anything other than growing the movement. Addressing the General Assembly on Sunday the political philosopher Slavoj Zizek acknowledged that “[t]here are truly difficult questions that confront us. We know what we do not want. But what do we want?” But for Zizek the central message of is a clear one: “We are allowed to think about alternatives.” 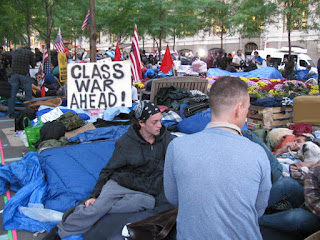 For those involved these early stages of the movement the mood is intoxicating and contagious. But as the warm October weather slips away and tactical differences become more pronounced there are dangers. “Don’t fall in love with yourselves” warns Zizek. “We have a nice time here. But remember: carnivals come cheap. What matters is the day after.” There is much discussion around the question of what a “win” would look like for Occupy Wall Street. Some think that they have already won whilst others believe that the movement has only just begun. In some ways both are true. Over the past month Occupy Wall Street has succeeded in permanently altering the political topography of America. How much more it achieves in the coming months remains to be seen.

“I’m here because I remember the Great Depression” eighty-year old Joan Davis tells me, her voice breaking with emotion. “My sister and I would often go to bed hungry and I still remember the look on my dad’s face the day he was forced to sell our farm. Things in America have needed changing for a long while and just maybe these people and others across the country can make a real difference.” 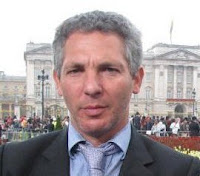 Email ThisBlogThis!Share to TwitterShare to FacebookShare to Pinterest
Labels: Be The Change, Direct Action