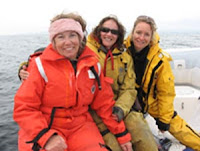 Having just spent the last month working alongside Peggy Stap of Marine Life Studies, California, I decided to ask her for her thoughts on humans and our role on this planet.

She responded, "Sometimes I hate to say that I am human. Even in my own circle of friends and family, some people are doing what they can and some are not. It is frustrating. But we can only keep trying to find ways to help people connect with the world around them. Everything and everyone is interrelated and dependent on one another, only together can we keep our oceans healthy for the future."
Peggy notices that some people may say they care, but this is not always reflected in their actions. She also notices that some people are so unconnected from their relationship with the planet that they do not care at all, in thought or action. Peggy believes that it is up to those of us who do care to help those of us who do not. She believes strongly in the role of education to bring home to us all the effects of our actions; effects which will have as great a consequence on us as on the rest of life on this planet.
Peggy believes that the message we need to get across is that, "Every little thing every single one of us does has an impact, like whether we use plastic bags and balloons or not." As she explains to students on a regular basis, if she influences just two people and those people then influence two people, who then influence two people... very quickly that influence has expanded to 1000's of people.
I asked Peggy what she thought of the view that it is our leaders and the corporate world, with their greater sphere of influence, who should be the ones making changes. She answered, "If we want our leaders to do more we need to tell them so. We must write letters and emails, sign petitions and make phone calls. If we want businesses to change their habits we must buy from ethical businesses and write to manufacturers. We must be prepared to play our part."
Peggy gets a little cross with people who are good at complaining but not so good at taking responsibility for their own lives. She recounts various stories of people who may have a TV in every room of the house but still think they do not have enough. She would love to transport them out of their comfortable lives to see the reality of the world and the hardships which many people face, in order for them to learn how to appreciate their lives and take responsibility for them.
A few days ago Bob Talbot, film maker and friend of Peggy's, said, "People are involved in conservation for three reasons: they care and believe in what they are doing; they are lost and do not know what they believe in; they are satisfying the needs of their ego. These three reasons are not mutually exclusive, there are of course crossovers."
His thoughts can probably be echoed in every walk of life from corporate boss to factory worker. Whether we are a conservationist, politician or average person on the street, we are all human and suffer from the same potential for both weakness and strength, darkness and light. It is our choices and actions which allow either our strengths or our weaknesses to flourish, and these choices are our own responsibility, no one else's. As Peggy says, "When I am on my deathbed it is me, and me alone, who will either suffer from having stored up anger towards others and guilt for my actions on this planet, or be at peace from feelings of good will, knowing I have lived my life trying to make a difference and leaving the world a better place."  I think she has given a near perfect definition of what it means to take responsibility for your own life.
Peggy Stap is the founder and director of Marine Life Studies, a cetacean conservation, research and education organisation in Monterey Bay, California. To find out more about the organisation's work, go to: www.marinelifestudies.org


Amanda Banks is a freelance writer from England, currently engaged in a three month project writing about the life and work of cetacean conservationists in North and South America. To read more of her posts on conservationists, go to: http://amandabanks.com/blog/
Photograph: courtesy Amanda Banks. Peggy Stap (left) with education co-ordinator Jenna Contuchio (centre) and writer Amanda Banks (right).
at 05:02

Email ThisBlogThis!Share to TwitterShare to FacebookShare to Pinterest
Labels: Be The Change, conservation, Environment