Tagore Tales - The Secret of Success 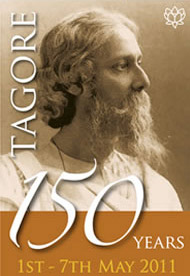 Mahatma Ghandi was visiting Tagore. Following lunch, Gandhi went to take rest when some of the ashram workers, followers of Tagore, approached him.
"Can you help us, Gandhiji? We are worried about the health of Rabindranath Tagore, he is not keeping good health. The Doctors advised him to take rest, but he refuses. We do not want his health to fail."
Gandhi asked, "Why do you want me to tell him to rest?"
"We know he will not go against your advice."

After Gandhi had rested awhile, he went to Tagore's residence and saw that he was deeply immersed in his work. When Tagore looked up and saw Gandhi standing there he asked him, "Are you not comfortable that you have come out from your rest so soon?"
Gandhi replied: "I have come to ask you to take rest after your lunch so your health does not fail. You are not keeping fit these days."
Tagore replied: "How can I do that? I must tell you the truth so that you will understand. When I was 12 I took a vow never to rest at any time during the day for any reason. Up to now I have kept that vow. How many more years do I have to live? Why would I break that vow now?"
Tagore's determination and commitment to his promise moved Gandhi. For 67 years Tagore had never rested during the day. Gandhi was impressed by his commitment to his goal and told him, "Now I know the secret of your success!"
Caspar Walsh is the film editor for Resurgence. He is an author, journalist and wilderness teacher. His new novel Blood Road is available in paperback. www.casparwalsh.co.uk
http://www.casparwalsh.co.uk/
http://www.guardian.co.uk/profile/caspar-walsh
at 07:24